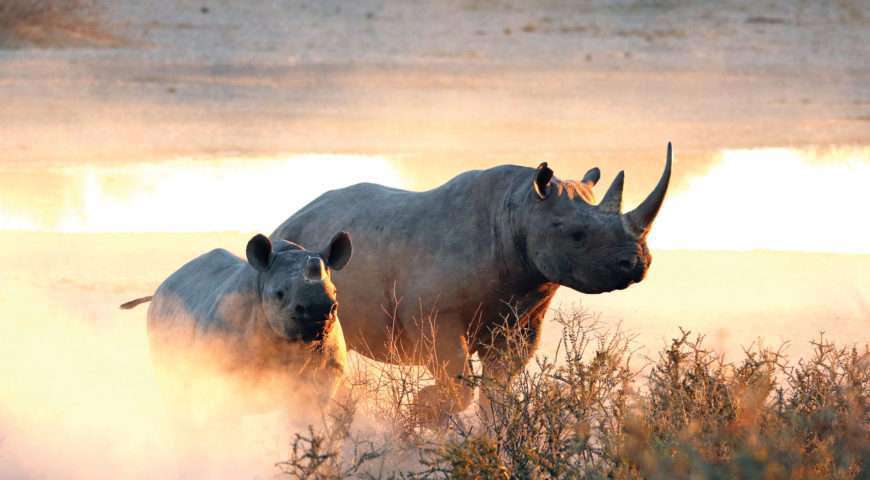 Rhino Conservation and Utilization in SA:

Why should rhino’s be hunted in reserves from time to time?

To demonstrate this a perfect example can be used of a rhino hunted in a community game reserve in Zululand during 2011. It was a specific old rhino bull. The fact that this bull was selectively hunted had no negative effect on the population of rhino whatsoever in this reserve or in the country. Poachers killing rhino indiscriminately and non-selectively, has a negative effect on the population. Instead this community benefitted financially (enormously) from this rhino. There is no better incentive for them to protect the remaining rhino on their reserve and one day another rhino can be sustainably hunted, for a substantial sum of money which will directly benefit this community again. Interestingly, the community reserve referred to also caters to photographic tourists. They are wisely making use of every responsible opportunity to benefit from their wildlife, and as a result their wildlife will remain protected because there is an incentive to protect it! This applies to many thousands of game ranches and some state reserves where hunting of rhino takes place. Hunting, like it or not, has played and will continue to play a pivotal role in the wildlife success story that we can be proud of in South Africa today.

Another example: A white rhino hunt (for a mature bull) became available in a well known South African Private reserve in late 2012. This reserve has a substantial white rhino population. All the income that is generated through hunting on this Reserve is ploughed back into the sound management of the reserve. If a mature (normally an old) rhino is hunted sustainably (quite frankly age is not the ultimate factor) out of a healthy population it has no negative effect on that population. In this particular case a very old bull was harvested; estimated to be approximately 35 years old. At some stage in the not too distant future this rhino would die, either through fighting or old age.
As a land owner and a believer in conservation through sustainable use, would the managers/ owners of this reserve rather have this rhino die of old age or would they rather get paid a substantial sum of money to have this rhino hunted, and plough that money back into protecting the other rhino in the reserve through sound management. Before going to print, this reserve had only lost 1 rhino to poaching. This is the success of rhino conservation in South Africa, this is one of the main reasons why we have 5000+_ rhino (privately owned) and 20,5 million hectares of privately owned land dedicated to wildlife in South Africa today. Stop legitimate trophy hunting for rhino, ban all trade in rhino, and the final loser will be the rhino. Let’s not end up like Kenya; do we want thousands of rhino or just a few hundred?

The vast majority of rhino poached in South Africa are being poached in our Government Reserves, far less have been plundered on private land. As long as private landowners have an incentive to continue protecting their rhino, rhino will continue to thrive on private land. This is the concept that was born in the late 1960s and it’s still relevant, if not more relevant today than ever before.

There is indeed a minority group of bad eggs in the Professional Hunting Industry (as far as we know who are not members of PHASA), just like one would find a few bad attorneys, car dealerships and pseudo doctors. These professional hunters have been involved in pseudo trophy hunting of rhino where the horns are destined for the illegal trade, where the horn is worth more than gold today. The syndicates and the professional hunters in question have exploited loopholes in some provinces legislation whereby they have been able to export rhino horns legally, under the guise of legitimate trophy hunting. Unfortunately all professional hunters have been painted with the same paint brush by the media, and the reality is that it’s only a minority that has been corrupted by greed! PHASA has stated categorically a number of times in the media that it condemns any form of pseudo hunting. PHASA co-operates closely with the DEA and various NGOs on this problem and going back as far as 2006 PHASA has been making suggestions to our Government on how to close down the pseudo hunting loop holes.

PHASA is an association of Professional Hunters who have been intimately involved in the conservation success story that South Africa is extremely proud of. PHASA markets South Africa as preferred hunting destination to foreign hunting tourists and PHASA is the recognized mouthpiece for Professional Hunting in South Africa by government and international organizations. PHASA is the largest association of its kind in the world and it was formed by pioneers in the game ranching and hunting industries 35 years ago.

Professional Hunting is a conservation tool, based on the sustainable utilization of natural resources.

PHASA supports legal, legitimate trophy hunting and condemns all activities which are not undertaken according to the PHASA Code of Conduct and laws of our land.

PHASA’s mission statement is to support the conservation and ecologically sustainable development and use of natural resources, for the benefit of current and future generations, through the promotion of ethical hunting! (to ensure environmental protection for current and future generations in accordance with the Section 24 of the Bill of Rights of the South African Constitution.)

Non-detrimental findings:
The above is well supported by the summary of the non-detriment findings by the Scientific Authority, as published by Minister Edna Molewa in Government Gazette 36117, dated 1 February 2013, attached to this document as Annexure A.

In closing, legitimate legal trophy hunting poses no threat to rhino; in fact; in contrast, it promotes the protection of the species.