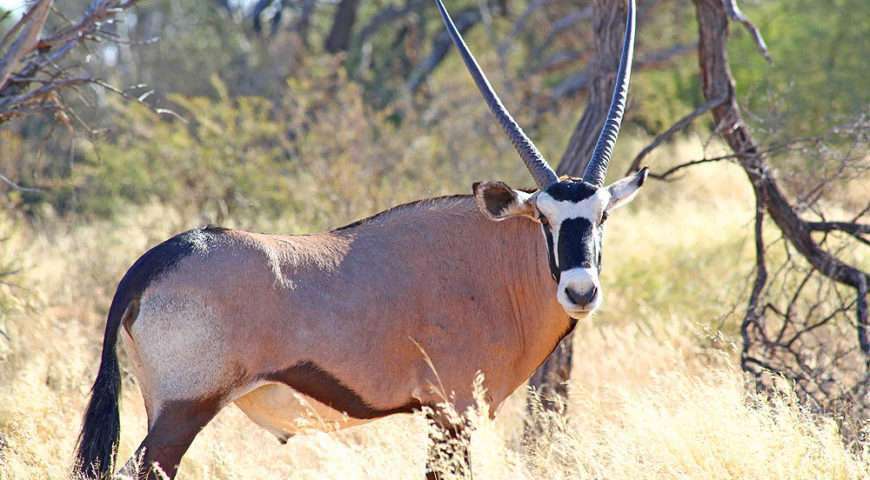 Frank Miniter is a bestselling author and a freelance journalist who concentrates on man’s struggle to keep the state in balance with the American dream. His latest book is Saving the Bill of Rights. He is also the author of The Ultimate Man’s Survival Guide. Frank’s website is www.frankminiter.com.

The sky was blue and the savannah red beneath sunburned grass and stubby trees stretching to the horizon. We saw baboons and ostrich feeding near the paved road outside Kimberly, South Africa. When we turned off the pavement onto a sand road leading into the Rooipoort Nature Reserve, a 100,000-acre private property founded in 1893, we spotted impala, wildebeest and blesbok in the grass between the trees. In the distance we noticed rocky ridges that reminded me of West Texas. Beyond them was the Vaal River.

This was our first stop on a trip that took us across southern Africa in search of the best way, politically incorrect or not, to preserve and enhance the continent’s storied wildlife. At each stop we met people Ernest Hemingway once lionized. They welcomed us into their slices of Africa and showed us how they’re using the market economy to restore and manage wildlife populations. The trick, they explained, is giving wild game a commercial value. Making wildlife into a cash crop gives local peoples an economic incentive to have robust wildlife populations. Otherwise locals only see lions, zebra, kudu … as meat to be snared, as competition for grazing goats and cattle, or as predators that might eat their livestock.

When we left the pavement we passed the “Shooting Box,” a house Cecil Rhodes had dragged on ox carts some 500 miles from Cape Town after it was shipped as a kit from England. Rhodes had it pulled to this rural area because this is where the game was still abundant at the very end of the nineteenth century. Hearing this, modern observers might entertain a cynical conclusion. They might imagine Rhodes, the founder of the diamond company De Beers and the Rhodes Scholarship, knocking over antelope with his rifle for sport and decide that’s an appalling image.

The thing is, because Rhodes wanted to hunt these animals, his property protected and saved then-disappearing species. According to De Beers, this property is now administered with a “progressive conservation philosophy [that] aims to demonstrate that wildlife has more than just an aesthetic value.” What they’re referring to is the fact that Rooipoort has been the largest private supplier of wildlife to reserves in southern Africa. The red hartebeest and black wildebeest, to name two species, were virtually extinct elsewhere in southern Africa in the mid-twentieth century. By trapping and transferring animals from this property—herds protected by the selfish self-interest of hunters—areas around southern Africa were able to begin new herds.

So as we drove down the red-dirt road through a forest of acacia and other trees and knee-deep grass we all smiled as impala casually strolled across the road in front. We sighted black wildebeest running between the short trees, their hooves raising dust into the late-morning sun. We spotted red hartebeest with their goat-like heads up to watch us pass. We saw the raised tails of warthogs as they ran away into the bush.

Ben Carter, president of Dallas Safari Club (DSC), was excited as he named the species. He’d invited Andrew McKean, the editor of Outdoor Life, and me along to witness what hunting can do for wildlife. He wanted to show us how DSC’s grants and its members’ money benefit conservation in Africa. Okay, I’m not a tough sell on this topic. I’ve travelled all over the U.S. on assignments for magazines to see what affect hunters and fishermen have on wildlife and conservation. I ended up so impressed I wrote a book about what I found called The Politically Incorrect Guide to Hunting. But though I found that hunters and anglers can benefit game in a modern country with game laws set by biologists and game wardens to enforce them, I had concerns about whether hunting can help wildlife in the remote areas of Africa.

When we arrived at camp—a collection of thatched-roofed buildings that seem to have grown naturally out of the bush—the two professional hunters (PH) we’d spend the next few days with were excited to show us what capitalism has been doing for wildlife.

The head PH was Hans “Scruffy” Vermaak. He got his nickname when he was a child. His father was a PH — credited as one of the first in this region. Scruffy says, “I was always with the Zulu boys and was awful scruffy looking when I came back from tracking game or who knows what. I could speak Zulu before English or Afrikaans.” The other PH was Mphaleni “Patches,” a Zulu who earned his nickname when he was a tracker. The story goes that some American, after days of watching him track, said, “You move like an Apache.” Not knowing what an Apache is and English not being his first language, he thought he’d been nicknamed “Patches” and so he was.

I should pause a moment to explain that, for those who don’t know, “PH” isn’t an honorary title in Africa. To become a PH means you have to pass a rigorous course on wildlife, hunting, guns and more. You also have to apprentice and, if you want to hunt dangerous game, to attain a certain amount of experience with animals that can kill you before you can be licensed to guide for lion, Cape buffalo, hippo and so on. The steps to becoming a PH vary by country, but clearing the hurdles requires a love for the wild—by “the wild” I mean the wildlife and the environment.

Scruffy is what was once called a “white hunter.” But that term is dead and the Hollywood image of the uncaring trophy hunter trying to conquer every manner of wild beast is defunct. Scruffy is president of the Professional Hunters Association of South Africa (PHASA), a group that uses hunting to manage and enhance wildlife populations. Scruffy is a modern iteration of the old and mythologized macho mold of the PH. He reveres the game he hunts and is friends with the Zulu and others he works with. He encouraged Patches to become a PH. He says it’s important for black hunters, such as Patches, to also become PHs.

That afternoon I went with Patches to hunt gemsbok. I asked him how difficult it was to pass all the tests to become a PH. “The English was hard, but the hunting and wildlife skills were things I knew,” he said. He had trouble learning to take written exams, but Scruffy hired a tutor and Patches learned and passed the tests.

I followed him into the bush after he spotted two large gemsbok feeding far ahead. We circled to keep our scent from their noses and slipped passed a herd of little white-and-tan springbok in the soft light of a late afternoon. We stalked so close we could see the gemsbok straight, long horns standing above brush 50 feet away, but it was too thick for a clean shot.

That evening my worry about whether hunters can continue to benefit wildlife in southern Africa was given a good thrashing as we had drinks around a campfire. Scruffy regaled us with stories about lions and elephants by firelight. He told us about a lion that tried to kill him in the back of a Land Cruiser and how he shot the cat point-blank. Then he paused a moment before adding, “God I love lions.”

Next he said, “People are worried about the African lion and I am too. But right here is an example of how giving wild game a real value can save them. You’ll see kudu, giraffe, zebra, springbok and a lot more on this property. Leopard are even making a comeback here. All this game has been in good numbers for generations because hunters protected them and kept the land wild. Later, when other ranchers realized wildlife is a commodity worth having, the game here helped restore their lost populations.”

I hunted zebra the following day with Scruffy and, as we drove to where he thought we’d find zebra, he said, “Without hunting all this game would disappear. Kenya banned hunting and saw its herds poached to remnants of what they were. Where there is hunting there is an army of people watching over the game, as it’s in their interest to do so. A PH hires locals from villages and works with them to protect wildlife. Locals do this because they can make a good living at it and because the meat from killed game mostly goes to them. Photo safaris can’t accomplish that in much of Africa.”

As he spoke I thought that if Adam Smith had known a damn thing about wildlife he could have written a whole chapter in that wordy book of his about how wild animals with a real commercial value are apt to be bred and spread over the land. When people realize it’s in their own self-interest to do so it’s much more likely to happen—altruism isn’t as trustworthy a friend as self-interest.

We stopped talking when, far off in the bush, we saw zebra stripes. We began a long, stalk together on a herd of zebra under a high hot sun. We crawled through yellow grass and used brush for cover to get close and be sure we found the old stallion in the herd. After a long time I shot and the zebra was down.

As a truck with skinners who would butcher the meat (some for us but most for surrounding peoples) approached Scruffy said, “You killed the old stallion from the herd. That’s as it should be. What hunters kill doesn’t deplete these managed populations. Hunters want the trophies and the experience of killing their own meat. They kill a very small percentage of the game. But because they’re willing to spend a lot for this experience this wildlife exists in plenty. Ranchers have figured out that wild game—kudu, springbuck, zebra, eland and all the rest—are worth more than cattle or goats.”

The skinning truck pulled up and men climbed out. Scruffy pointed at them and said, “I hire trackers, skinners, camp help and a lot more. My economic imprint is a lot bigger than someone running a photo safari business. And my trackers know right away when a poacher has entered the property. Hell, they might be able to indentify the bloke by his footprints. This knowledge helps us put a stop to poaching. Hunting is the greatest conservation tool. And not just for plains game, but for elephant and lion.”

Later that day, on the way out of the De Beers property, we stopped by an ancient waterhole to see Bushmen rock carvings. Long ago they chiseled images of rhino, blesbok, elephant, zebra and the rest of the many animals into flat rocks as they waited for game to come to the waterhole. They didn’t, however, carve themselves or their bows and arrows. I found this to be a deep expression of their love for the game. Hunters have always been here and have always cherished the wildlife. We were natural. We were part of the natural process and nature benefits when we understand our role and embrace that responsibility.

Next we were flying to Namibia where we would feed a village, but I’ll tell that moving story next time.

View this article at: http://blogs.forbes.com/frankminiter/?p=618