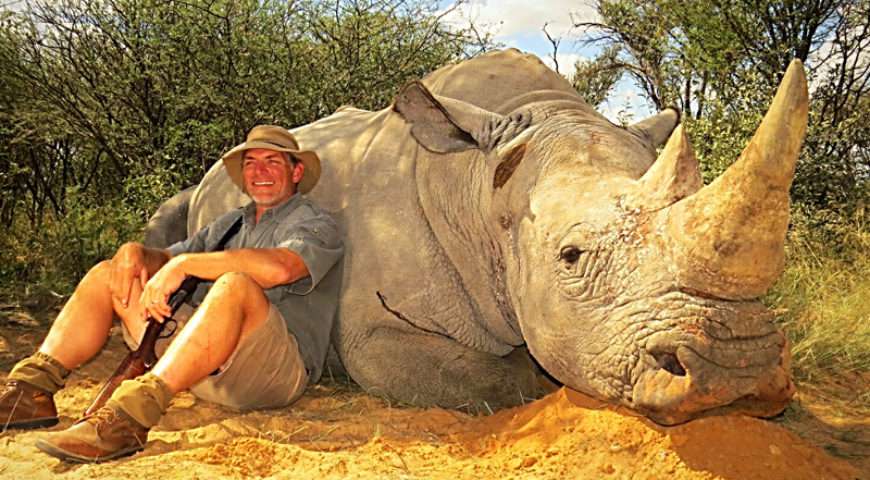 YOU’RE HOME, YOU’RE AMONG FRIENDS AND DANGER AWAITS – a hunt in the Kalahari

Early 2017 proved a pivotal point in my hunting career. I was part of something I’d previously thought unimaginable, to the point that a considered response to the question, “How would you like to do a white rhino hunt—a proper walk and stalk with your Double, on the largest concession in South Africa?” had never entered my thought process. Surprisingly I didn’t laugh, choke, or chortle, but asked the standard questions for which Clive was prepared. “And Oh, could I have an answer within 24 hours?” Yes, it would be expensive, but backed 1000% by my beautiful wife, within a day Michelle and I and our dear friend, Laura, were making plans for the Magical Kalahari.

Magical falls tremendously short of a fitting description, yet the English language offers none better to describe this place that feels so foreign yet so inviting and so at home to the wandering hunter. The game, the grounds, the hospitality, the smell and taste, and the feeling in your gut that tells you you’re home, you’re among friends, and danger awaits was a recipe that created a sense of relaxed urgency unrivaled in my travels to date.

We met old friends for the very first time the moment Kathy and Russell greeted us upon our arrival. Life for the next ten days was splendid due wholly to their untiring effort and devotion directed at keeping their house guests cozy and comfortable — and what a job they accomplished! I like to think us Southerners easy anyway, but Kathy gives new meaning to the word charm.

Day One on the truck opened an entirely new world of opportunity to me as our trackers, Patches and Muzi, led us on track after track bringing us to within range of the Double on not one or two, but three different White Rhinos. As is hunting, opportunity doesn’t always bring an end to your hunt and we headed back for the fire full of spent energy and high expectations.

The following day proved more of the same: opportunities, close encounters, countless miles covered both on the truck and on foot. Rhinos, huge prehistoric-like creatures can appear and disappear at will leaving nothing but a faint depression in the sand where only a moment ago they stood. At times I could easily track them, more times than not I would have easily been lost. Patches, the all-seeing, all-sensing tracker extraordinaire, misses not a single turned grain of sand. I have witnessed trackers that would awe even the staunchest nonbeliever and I place Patches in a class alone.

As the suns continued to set with no shot fired, the morning truck rides grew ever quieter with determination — day six nearly silent, but the hush was broken just before noon as the report of my Double echoed resoundingly through the scrub relaying to Michelle and Laura that our quest was complete. Removing our Courtneys and covering the last 30 yards in stockinged feet, Clive and I communicated via hand signals only. As previously determined, a tap on my shoulder would mean we were on a glorious old male past his breeding prime and the decision to squeeze the trigger would rest solely with me.

Aim points and angles had been discussed each night at the fire. With the Rhino standing broadside at fifteen yards, the 500 grain solid drove deeply into the massive bull two inches above the fold on the right shoulder. As if by script the enormous head dropped and the ancient warrior bounded. By instinct alone the barrels swung left to right like those of a .28 gauge following a rising covey. In slow motion the ivory bead, on an almost horizontal arc, went from shoulder through massive neck, passed the ear and there, just before following all the way through the gargantuan head, lead the bullet to the precise spot. Intensely focused, peripherals a blur, the second 500 grain solid from my .470 NE found the brain and the previously unimaginable had happened one and a half lengths from where he pushed off.

I watched as he skidded to a stop chin first in the shaded orange grains of the Kalahari. In an instant, the rush and commotion, explosion of adrenalin, and flight and report were wiped away, replaced by revere and relevance, awe and introspect. Seconds ticked by, then minutes. Hugs, handshakes and back slaps, though heartfelt, seemed small in the weight of reality. Only after we sat and knelt in the sand with him for a while, expressing our appreciation for his life and his being to near exhaustion did the moment come back into full focus. To say I am changed would be to say the Kalahari is vast.

Our safari, far from over, continued with such an air of relaxation and playfulness that I almost felt as if we had embarked on an entirely different journey. A tented spike camp, several extraordinary plains game, and Michelle’s first ever African trophy—a great Red Hartebeest—along with Lion, Hyena and Cheetah sightings helped to round out our monumental experience. My only wish is the ability to impart the emotion in even greater detail.