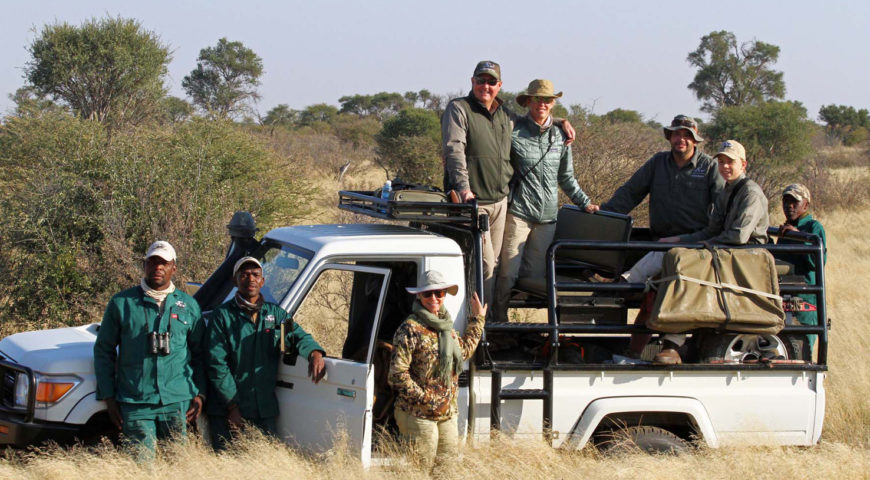 THE BUFFALO THAT BEAT US!

Trey and his family arrived in the Kalahari for their first safari in Africa in June 2018. Clive and I were booked as the PHs and we were anxious to get cracking with the hunt. Trey was after Buffalo and his children had a variety of plains game on the menu. Buffalo hunting is addictive, and I doubt there is a PH in Africa who doesn’t get excited at the prospect of pursuing this formidable beast. 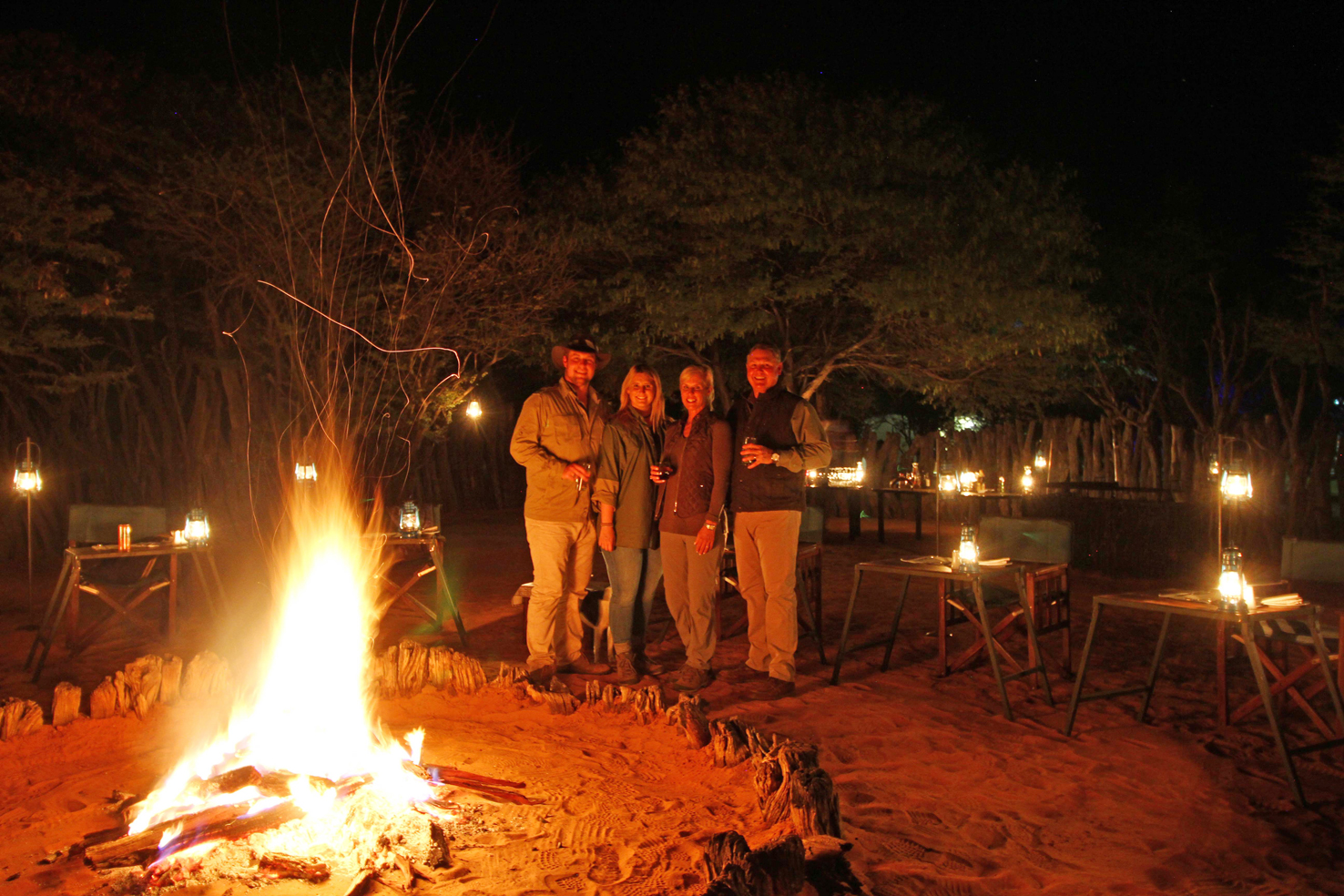 My favourite destination to hunt Cape Buffalo in South Africa is our Kalahari Concession for a variety of reasons. Firstly, the area is huge, the Buffalo are wild and live a totally natural existence amongst lions and other predators and the bull groups that we pursue are alert and totally cunning! Bulls come and go from the breeding herds and frequently form bachelor groups ranging from 2 to 15 animals. Sometimes we encounter ancient bulls, known as “dagga boys” (which means mud boys because they love to wallow and they’re frequently caked in hard dried mud) that live secretive lives way below the radar, they’re often alone or they may have a buddy or two in tow for company.

We prefer to pursue bull groups because this is where the older bulls are, away from the hustle and bustle and chaos of the breeding herds. The Kalahari Concession always provides our clients with a challenging and rewarding Buffalo hunt but this time the Buffalo were at the top of their game. We didn’t know it on day one, but we were going to have our work cut out for us and the marathon was just about to begin. 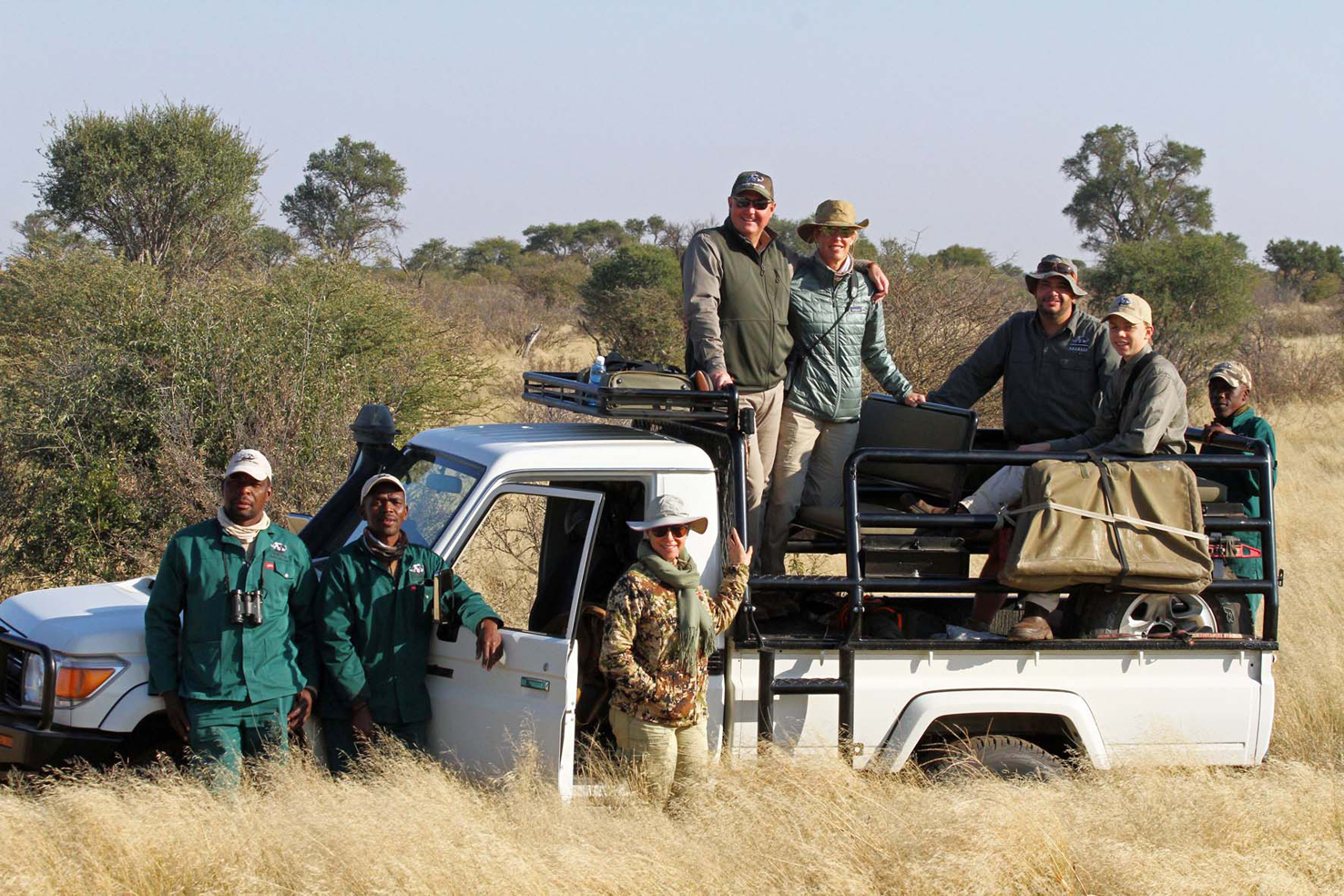 To go into detail about the events that took place each day would make this story too long, so I’ve decided to touch on some of the highlights which took place over the next six days. Early on the first morning we saw four Buffalo bulls off in the distance. My Leica 10x40s quickly revealed that one of the bulls was a thumper of a trophy – wide with deep curls and a heavy boss to boot. I motioned to Trey that it was time to get going. We had perfect cover, the breeze was in our faces, and the Buffalo had sauntered off relaxed and undisturbed. What could go wrong?

Soon we arrived at the location where we had last seen the Buffalo. Their tracks indicated that they were grazing in a north-easterly direction. We got into line and onto the spoor with my tracker Robbie in the lead. The dung was still steaming hot and the large dinner plate sized tracks were as clear as could be in the soft, sparsely covered sand. Everything was perfect and I was already picturing the stunning photo we were going to get in the soft morning light.

Soon we caught sight of the bulls, the top of their backs moving slowly through the brush as they grazed, heads down, totally unaware of our presence. We were closing in when suddenly the back of my neck felt cool as the breeze changed direction. Ahead of us the bulls exploded into a full-blown gallop. We could here them crashing through the brush, totally ignoring bushes that we would have to circle around! The heavy pounding of their hooves raised a cloud of dust as they tore away from the terrifying human scent the wind had taken to them. In a flash they were out of sight and the dust trail they left drifted away in the breeze. The strong fresh scent of Buffalo was all around us, but I knew that after their swift and determined departure they were going to put some serious distance between us. As we started off on the tracks the breeze returned to normal, coming straight out of the north-east into our faces. We were back in business.

The tracks headed north towards a waterhole near our camp and I was certain that we would soon catch up with our quarry. After a few hours we passed the waterhole near camp and to my dismay they hadn’t stopped to quench their thirst despite the temperature rising. We tracked the bulls for the rest of the day, bumping into them on two more occasions, each time the wind deceiving us just as we were closing in. Crazy how the Buffalo would buttonhook allowing us to walk directly into the wind, and would blow us out. Notwithstanding the ever changing winds, the weather was perfection!

At sunset we enjoyed an ice-cold beer and headed back to camp where a warm campfire greeted us along with exciting stories of successful hunts from Trey’s son & daughter. 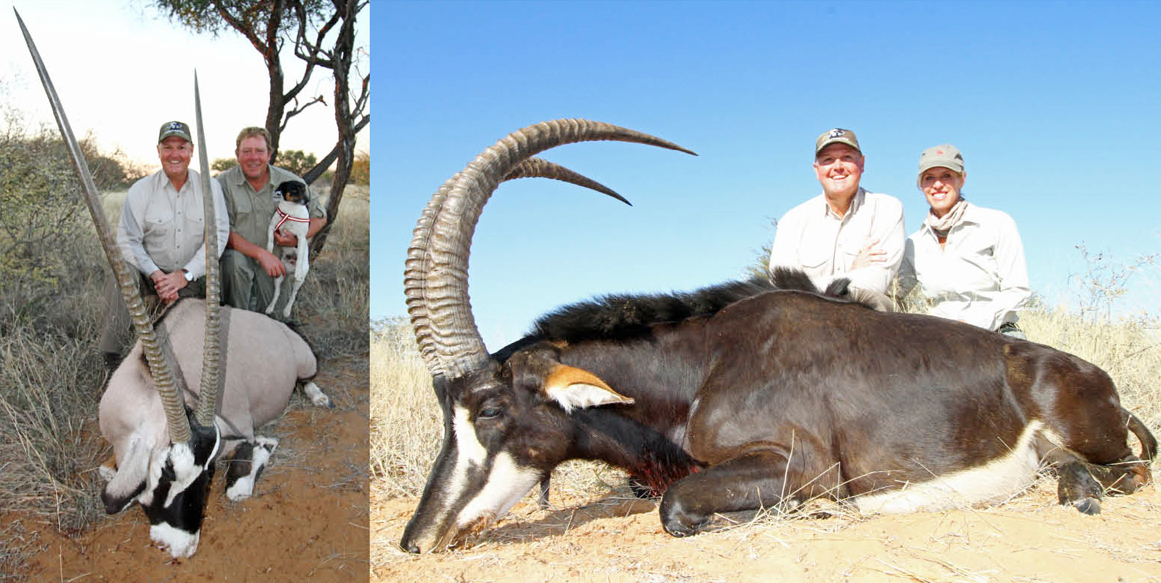 The next 5 days played out with us trailing the same Buffalo all day from dawn till dusk, stopping briefly in the shade of tree on some days for a quick bite of lunch. We set our sights on the four Buffalo we followed on the first morning. The more they eluded us the more determined we became to succeed. The wind, or lack of it, played into the Buffalo’s hands every day. The miles and miles we covered in huge blocks with no reference points or roads resulted in us putting my GPS to full use daily.

My wife Sarah came along on the safari and became the driver because I eventually had all the trackers in the field with me. It is a miracle how Sarah was able to follow my instructions and find us far from where we had left them at the end of each day. The Kalahari normally has a steady breeze but during Trey’s safari it barely existed at all. Each day the breeze would seesaw back and forth making an already challenging task virtually impossible. In the early mornings the breeze held steadier but because the Buffalo knew they were being pursued they started covering longer distances resulting in us getting nearer to them late in the day when the already testy wind became even more unpredictable. We soldiered on, thriving on the thrill of the hunt and the chase and the beautiful challenge that lay before us.

Soon we were able to tell when this group of bulls was preparing to lie up. They would be walking into the wind to the north (miles ahead of us) and their tracks would start circling to the west and then turn sharply to the south and then the east. In other words, they would circle around and land up bedding down behind us as we followed their tracks. The first few times they caught us hands down but it didn’t take us long to spot the signs and counter their clever trick. As soon as we realized they were circling and searching for deep shade we would leave the tracks, cut back and try to estimate where they would be bedded down.

We managed to get right onto them several times (literally 25 yards and on one occasion even closer) as they slept spread out, all facing different directions. The first problem we had was identifying the bull we wanted in the thick black thorn, the second problem was finding a clear shooting lane. The most notable challenge of all was the unpredictability of the breeze, which constantly gave us away, resulting in sleeping Buffalo becoming racehorses in a split second. It’s incredible to watch a Buffalo, which is dead to the world, go from zero to a hundred in a flash. The speed and agility of this animal is astounding to put it lightly. They are not graceful beasts but they’re certainly not lumbering chunks of hide and horn. Buffalo are fleet of foot and must not be underestimated. 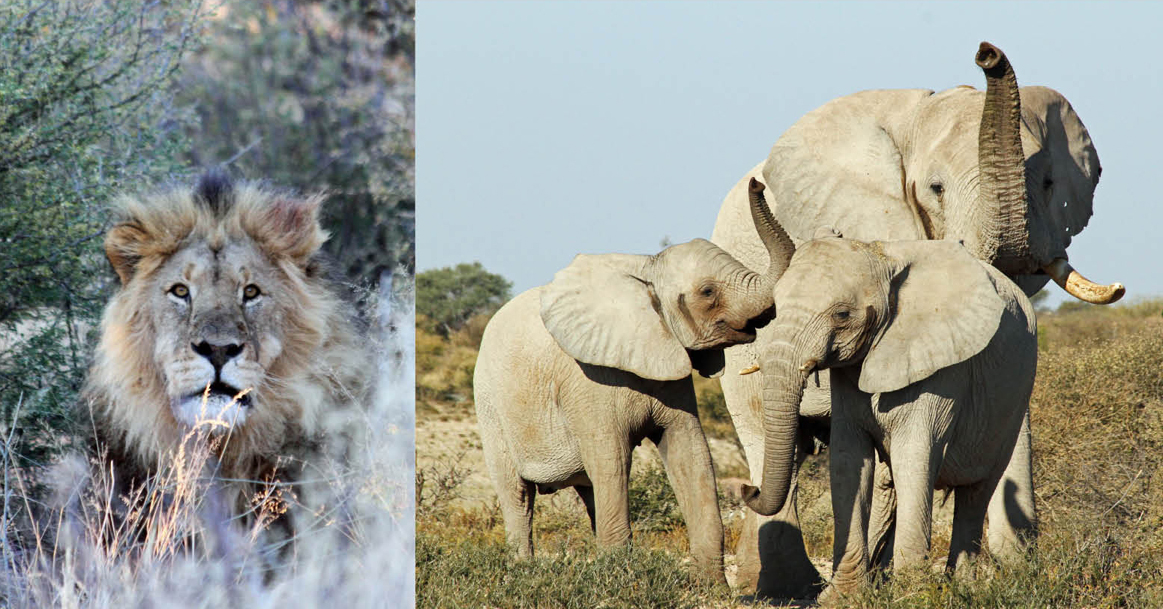 With one day left on the safari Trey called it quits on the Buffalo so that he could spend some time with his fabulous wife who had accompanied us on some of the tracking marathons but had spent a lot of time waiting for us for hours on end in the truck. Trey also wanted to hunt a few plains game species and take in some scenery from the vehicle because all we had done for 5 days was walk. Trey hunted hard, we covered 48 miles spending entire days on our feet, sometimes crawling or being hunched over. Our trackers Sipho and Robbie tracked like magicians and we persevered for days on end. It was fantastic!

We saw amazing sights; we walked into White and Black Rhino at very close quarters in extremely thick cover. We enjoyed the solitude of being alone in the wild, far from hunting tracks, with Buffalo just ahead of us. On occasions we walked right up to Gemsbok, Wildebeest, Warthog and other species, spooking them when they spotted us at very close range. During the safari when we did drive from A to B we enjoyed wonderful sightings of Lion, Cheetah, Rhino and other game.

Our final evening was warmer, beautiful in every way as the sun began to close on the horizon. We road home on the back of the land cruiser sipping chilled white wine whilst we savoured the soft glow of the sun as it slowly melted away. 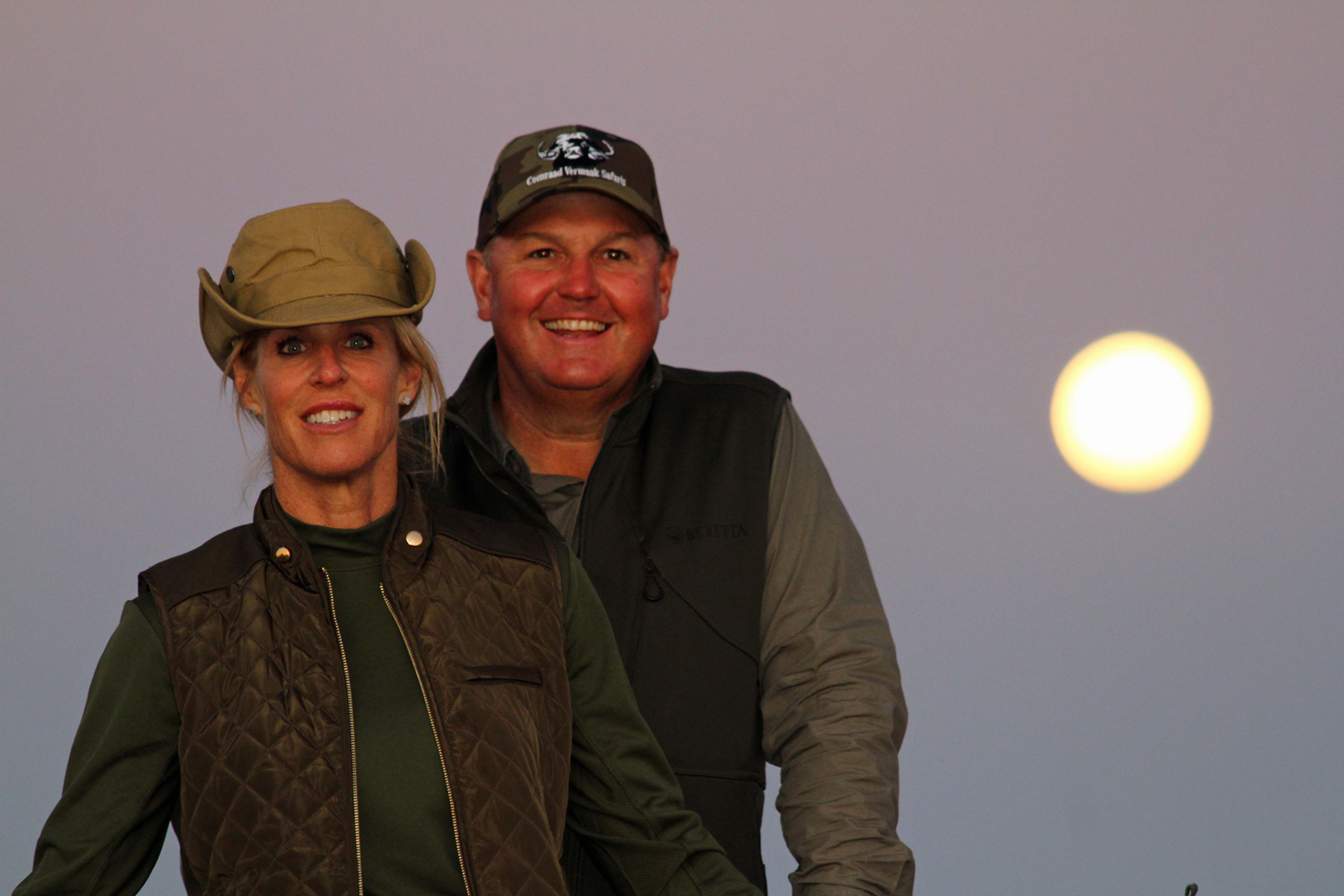 Every evening after our failed Buffalo hunts I would say the following to Trey “the best thing about not getting a Buffalo is waking up in the morning knowing that you’re Buffalo hunting again”. This statement rang very true because Trey returned home and immediately booked a Buffalo hunt with us for May 2019……… but this is a story for another day.

My Father always told me that “you do not have to have killed to have hunted”. How true this is!